Useful information hunting in the indexes of seemingly forgotten books.. 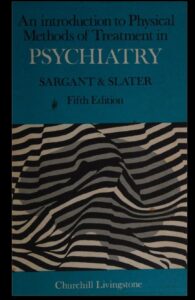 Note that this is a fifth edition. And it is also probably worth noting the recommendations on the inner sleeves. This was a very important book for medical professionals on both sides of the Atlantic Ocean from 1944 until at least the mid 1970s.

‘The Use of Hallucinogenic Drugs

Until recently increasing use as an aid to psychotherapy was being made of drugs which cause severe states of confusion, disordered consciousness and hallucinatory experiences, such as LSD 25, mescaline and some mushroom derivatives. Foolish claims of the value of this technique have been made: and equally foolish interpretations are often offered of the material which emerges from the patient’s chemically disordered brain. Some therapists claim that they elicit the contents of the patient’s subconscious or unconscious mind and repressed memories which can then be used for interpretive therapy. But experiences shows that what often comes out is often determined by the interests and beliefs of the therapist himself; if he believes in birth trauma and the re-living of birth experiences, then delusional memories of such events may become gratifyingly available. Both strict adherents of Freud and those who depart in some respect from his tenets find the material that fortifies their faith. The patient’s personal interests also influence the chaotic fantasies produced by these drugs. Thus men with religious convictions have had experiences in which they believed they saw and spoke with God; the anthropologist has relived the aeons of time, and mimicked the behaviour of the primitive reptile he felt he had become; and those who have been through an analysis have produced fresh material of a fruitfully psychoanalytic type.

A very sceptical attitude must accordingly be taken if any deductions are to be drawn from the psychotic experiences of such a drugged state. The main value of these drugs is not for that purpose. But intense states of belief may be created in some of those who go through the hallucinated confused state, which is afterwards felt to have been of tremendous emotional significance. Such states of belief can, of course, be used therapeutically, for instance to compel faith in  psychoanalytic doctrine, or to bring the patient to accept the insights which his therapist has evolved. Even articles of faith which are patently false or imposed from without will be taken as the patient’s own.

All abreactive techniques make use of the force of suggestion, the methods which use drugs perhaps even more than the others. Both false memories and true can be equally effectively used in this way. The production of a state in which confusion is complicated by massive hallucination does not  mean a departure from this primary principle, and the essentials of treatment with hallucinogenic drugs do not differ markedly from those of other drug abreactions. The same sort of patients can be helped, and the same sort of results will be obtained. Patients with anxiety hysteria are the ones most likely to be helped. Obsessional patients are helped only rarely, and are often made worse as they may become disturbingly obsessed with some of the bizarre material that emerges in the drugged state. Depressive patients are left with their depression untouched; and schizophrenics not only derive no benefit but are nearly always made worse by the addition of artificial psychotic symptoms to their spontaneously occurring ones. Persons of schizoid disposition should not be put in danger by the administration of a hallucinogen. …’

And on it goes… I will carry on,  gradually,  in alphabetical order, (from  Abreaction to Ziegler,)   exploring the index of ‘An introduction to physical methods of treatment in psychiatry’ .. William Sargant is not often cited by the psychoneuro professionals and drug-obsessive amateurs these days. I am pretty sure it is because of his history of Insulin treatments etc..

For me, with hindsight to assist me in my endeavours I am never going to be an advocate of such treatments.

However, I do see how a quack or even a brilliant doctor could think that prolonged sleep/ induced coma could have lead to improvements in mental states and behaviours of mentally unwell human creatures, leading to benefiting patients who often suffer from chronic bouts no sleep (insomnia)..

Electric shock treatments still take place these days. I squeem at the thought of being sedated and having fit-inducing shots of electricity forced through my  head.

I am quite certain that William Sargant experimented on many patients in a massive variety of ways. But he doesn’t come across to me as some sort of monster. And he did something which a lot of the current crop of public-facing psychoneuro professionals and their amatuer fans seem to be mostly incapable of :  writing in easy-to-understand English.

The next entry in the index I will be looking at will be ‘Amphetamines’ and ‘Adolescents, treatment of.’